Gen Y has been called the "self esteem generation," and for good reason: a recent study found that we prefer receiving self-esteem boosts (such as compliments) over sex, food, and money. Maybe that's a good thing, considering many are broke and living at home. A feature on the predicament of twenty-somethings in New York Magazine on Sunday laid out these statistics:

Nearly 14 percent of college graduates from the classes of 2006 through 2010 can’t find full-time work, and overall just 55.3 percent of people ages 16 to 29 have jobs. That’s the lowest percentage since World War II, as you might have heard an Occupy Wall Street protester point out. (Not coincidentally, one in five young adults now lives below the poverty line.) Almost a quarter more people ages 25 to 34—in other words, people who should be a few years into their independent lives—are living with their parents than at the beginning of the recession.

There's a disconnect here, right? On the one hand, our generation has shattered all records for high self-esteem, according to the traditional measuring methods. On the other, it sure doesn't look like most of us are actually achieving very much, by traditional (ie, cultural) standards. So how are we filling that gap? I believe, in many cases, the answer lies on the internet.

So you pushed yourself through high school to get into a good college. You pushed yourself through college to get your degree. You come out on the other side only to find a recession in full-swing, and a million other 20-somethings just like you chasing down the same scant jobs there are to be had, with [mostly irrelevant] degrees flapping uselessly in their hands. The normal sources of self-esteem aren't available to you. You're not bringing home a big paycheck. If you do manage to secure a job, it probably isn't very fulfilling. It's starting to look like you aren't that special after all.

Enter virtual achievement and artificial self esteem. Virtual achievement: Okay, so you're not bringing home a big paycheck, but you can get to level 42 on Farmville. You can have 800 friends on Facebook. Your Klout score just went up by 2 points. Artificial self esteem: Okay, so your job (if you're lucky enough to have one) isn't fulfilling and you don't feel like you're making a difference. But if someone retweets you or +1's your blog post, you feel important and seen.

I'm not saying this is unequivocally bad. Low self esteem wreaks havoc on motivation, so if social networking keeps you feeling good enough about yourself that you get up and look for a job every morning instead of dissolving into the couch, that's great. On the other hand, I'm concerned that this type of activity could actually supersede real-life action and achievement. I think for too many people, it already has.

Today, Netflix customers received an email recanting CEO Reed Hastings' announcement that they would split DVD and streaming products into two separate brands: Netflix and Qwikster. According to the email, "...for many of our members two websites would make things more difficult, so we are going to keep Netflix as one place to go for streaming and DVDs."

My first instinct was to write a tongue-in-cheek follow up to my original post about the Netflix/Qwikster split, implying Reed was taking my advice. But then it struck me. While the original email and blog post announcing the change came directly from Mr. Hastings. This email is signed, mysteriously, "The Netflix Team."

Does this mean Reed's locked himself up in his ivory tower, refusing to eat humble pie? Or could it mean something more ominous for him? Could he be on his way out, for this mistake? I wouldn't be surprised. Netflix has lost a lot of customer trust in the last year, and as CEO, Reed Hastings is the appropriate guy to take the fall. I would have expected the "We're sorry, we were wrong" messaging to come directly from him, since he's already in the habit of apologizing. The fact that it doesn't makes me think they're setting him up for a bigger fall... say, from the heights of his corner office to the pool of the unemployed below.

It would be a smart PR move, I say. What do you think? Is Hastings to blame? Would his ousting restore some customer trust?
Posted by Maddie Ruud at 11:40 AM 3 comments:

What Happened to "The Show Must Go On?" - CalShakes "Shrew" Rained Out

I don't get out much. No, really. Chronic pain puts a serious damper on your social life... and work life... and just life in general. Last night, three of us braved two sardine-style packed BART trains and a picnic in the rain to see California Shakespeare Festival's "Taming of the Shrew." We were in pretty good spirits. The land on which the Bruns Memorial Amphitheatre sits is a watershed, and is just as beautiful wet as dry. We shared a bottle of wine and a delicious chèvre under the dripping eucalyptus, spied an owl in the trees above, and made ready to hunker down in the theater with our winter coats and a big fleece blanket. But it was not to be.

After standing by the theater doors for half an hour waiting for them to open the house, with no announcements or updates from staff, we were told the performance would be cancelled and to collect a voucher good for a ticket in the same section to another performance of the show... which only runs for another week. I've got a couple of issues, here. 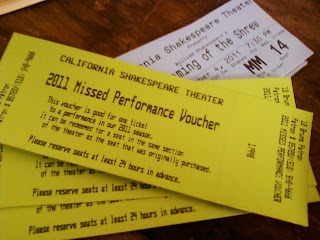 Now, CalShakes is a non-profit organization. I completely understand that it's difficult for them to give refunds. My issue is not with the voucher, it's that it's essentially only good for another 10 days. It's the last show of the season, and seating is limited. Luckily, the members of my party are all free next Wednesday, and luckily, there is availability in the same section on that night--probably because we were in the cheap seats to start with. But what about the season ticket holders, who will be forced to take seats with an inferior view, if they get seats at all? What if we're rained out again next week? So late in the run, vouchers should be good not only for this show, but for next season as well. That's gripe #1.

Gripe #2 has to do with a lack of clear messaging and communication. This is always a pet peeve of mine, as we saw in my rant about Clipper Card's customer service. Today, of course, there are several prominent links on the CalShakes website regarding their rain policy, but I didn't see them yesterday when I looked before leaving the house. Then, there was absolutely zero communication with the crowd that stood in the rain for 30 minutes waiting to be seated. Clearly, not everyone who'd bought a ticket showed up, but those of us who did deserved a little more courtesy. If they'd made an announcement that they were waiting to see if the drizzle let up, and otherwise the performance would be cancelled, I'm sure at least half of us would have left right then, considering that the self-same drizzle had been going on for hours.

And maybe I'm old-fashioned, but I agree with the elderly gentleman seated next to my other half on the shuttle back to the BART station: What ever happened to "the show must go on?" As I pointed out, in Shakespeare's day, the expression was "to hear a play," not "to see a play." If they're worried about falling, why couldn't the actors stand in one place on stage and give us an animated vocal performance? We were all willing to brave wet butts and soggy coats for them. Throw on a slicker, and give me the same consideration.

The whole experience brought to mind another "Taming of the Shrew" years ago. I must have been in high school. My family had had season tickets to CalShakes since I was a tiny girl, and we'd never missed a performance. The weather was threatening, but we bundled up and braved it. At intermission, it began to shower. They held the second act until it let up, but a few minutes in, it started coming down again. Most of the audience left, but the actors put clear ponchos over their costumes, reduced their movement, and continued the play. I remember Sharon Lockwood, as Gremio, carrying a goofy umbrella. By curtain call, my family made up four of the half-dozen who'd stuck it out. We gave the cast a standing ovation. They applauded us right back. It was one of the most unique and rewarding theater-going experiences of my teenage years. Last night could have been just as unique, just as rewarding. Instead, it was an epic disappointment.

My partner, my friend, and I will return next week to see "Shrew." I'll psych myself up to leave the house, I'll suffer the rush-hour BART ride. We'll have some more wine, some more cheese, and we'll enjoy the show. But even if it's the best performance in the world, I'll still have some regret and resentment about last night. I just hope it doesn't rain.
Posted by Maddie Ruud at 11:15 AM No comments: