Mountaintopless: Why I Took Off My Shirt at 9,800 Feet

Well, the shortest and most obvious answer is: WHY NOT?!?!?!

But as is so often the case for those of us with chronic pain, behind the snapshot is a longer story of the struggle it took to get to that moment. Context changes everything.

The night before this hike, I was awake until 3 am with a migraine, the wind furiously whipping the tent wall inches from my pounding head. Brendan and I were camped close to the bottom of Nine-Mile Mountain in the Rockies, and had agreed to hike it the next day if I felt well enough. (As I told him, "Don't put Maddie at the bottom of a hill if you don't want her to climb it.") All night I kept thinking about that peak, fixating on the idea of standing at the top... topless.

Maybe I've watched too much American Ninja Warrior. It seems to be a popular form of celebration for a certain set of athletic men to rip off one's shirt. While I usually roll my eyes at the excess of testosterone, that particular night I suddenly felt indignant that such a demonstration wasn't an option for me. So I decided I'd make it an option. I focused on getting through the night so that I could get to that summit.

When B woke up and rolled over to look at me in the morning, he could tell I was in rough shape. "You look awful," he said. "How are you feeling?"

"I didn't sleep much," I told him. "But right now we are going to get up and go climb that mountain. And if we get to the top, I'm taking my shirt off."

So off we went. We had to stop a few times for me to retch by the side of the trail. About halfway up, I said, "Right now, everything in my body is telling me what a terrible idea this was."

"That doesn't mean I want to turn around."

And on we hiked.

Finally, victory. I stripped off my shirt and bra and stood legs wide, arms outstretched, mouth open. I call this pose "Welcome to My Party" after an art piece by Joyce Pensato; I strike it everywhere. It feels good both physically and mentally, simultaneously an opening and an embrace. But let me tell you, it feels that much better when you're topless at 9,800 feet. 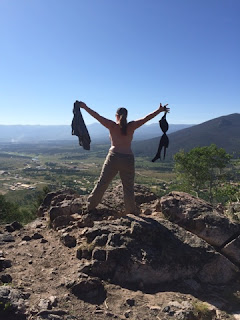 We sat on some rocks for a while to soak in the view. Brendan munched trail mix, but I knew I wouldn't be able to keep it down. Then, B had the genius idea to forage some dandelion leaves for me. The bitter greens helped settle my stomach a little on the descent, but all I could do for the rest of the day was sit in the shade at our camp site.

I am so honored to be a panelist at For Grace's upcoming annual Women In Pain Conference for the second year in a row! Building on last year's theme of "Accepting Our New Normal," my panel this year will address the art of the comeback.

What does a comeback look like when you suffer from debilitating chronic pain? The truth is, it looks different for everyone... and more often than not, it's a fluid process rather than a static achievement.

Just a few days ago, my fellow panelist Christina Kish and I connected with Lene Andersen for an interview about how we use unusual activities like burlesque and pole dance in our own ongoing comebacks. Check out the full article here, and I hope you'll join me in person or via social media for the WIP Conference on September 11!
Posted by Maddie Ruud at 12:03 PM No comments: