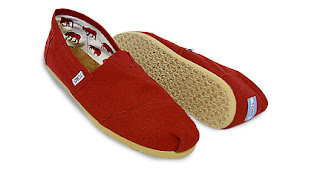 Here in the San Francisco Bay Area, TOMS shoes are ubiquitous--a favorite with hippies and hipsters alike. I probably see upwards of half-a-dozen pairs a day, strolling the City or the streets of Oakland. That's the marketing genius of TOMS: they are instantly recognizable, and owning a pair not only helps a child in need, it identifies you as a member of the do-gooder club to everyone around you. TOMS market themselves. I recall seeing a few TV ad spots for them at the beginning of their rise to popularity, but I haven't run across one in years.

So imagine my surprise, when late last night I turn on the television to a commercial for Kmart, full of TOMS-clad feet frolicking through nature. TOMS? At Kmart? For the most part, I've only ever seen them sold at locally-owned shoe stores... the only chain-store exception that I know of being Nordstrom. Same classic design, same one-for-one donation pitch, but something wasn't right. It took my somewhat sleepy brain until the end of the ad to figure out that I was not looking at TOMS at all, but a knock-off by Skechers called, of all things, Bobs Shoes. Somehow, I missed the righteous indignation that flared up on the internet last fall when these puppies were introduced, but even if I'd been in the loop, this ad still would have surprised me, considering that I haven't seen a single pair of Bobs on the street, and there hasn't been much (if any) buzz about them since the initial outcry. 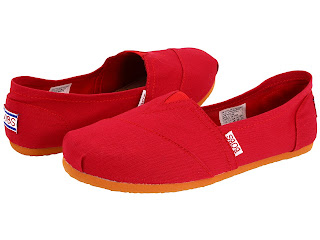 It's pretty incredible, really. Compare TOMS shoes (pictured top) with Bobs (pictured right). There's no question that Skechers is ripping off the design, stitch for stitch. The wrap of the fabric, the tag placement, they even mimic the TOMS flag logo on the heel! The prices of TOMS vs Bobs are comparable as well, so there doesn't seem to be much to be gained, other than negative press.

Still, this model has been working for Skechers for quite some time. The company has a reputation for copycatting successful shoes (and being sued for it, as in the case of Crocs vs Skechers and, more recently, Asics). The only conclusion I can draw is that the costs associated with developing original concepts and forging new marketing territory are higher than the cost of the occasional lawsuit settlement. It's bad karma, but apparently it's good business.

What's especially sad about this particular venture is that while Bobs' non-profit partner (Soles4Souls) is a worthy one, this clear plagiarism by Skechers designers reflects badly on them as well.

Skechers, you're sketchy. My vote (and my money) go to TOMS.
Posted by Maddie Ruud at 3:19 PM