When I first learned that cursing helps pain tolerance, I couldn't wait to tell my partner Brendan. While I keep my language appropriate for the company I'm keeping (ie, keeping it squeaky clean around children, elders, and strangers), I do enjoy a good expletive and have never been shy to use one to emphasize a point. Thus, I got a real kick out of discovering that my fondness for certain swear words might help relieve my chronic pain.
Brendan was similarly amused, but brought up an interesting question: Is it the actual curse words themselves that provide the benefit, or simply the act of exclamation itself? We chuckled over the idea of vehement outbursts of "Butterflies!!!", "Unicorns!!!", or "Rainbow!!!"--words with traditionally positive connotations. But once we'd stopped giggling, I started to think about this idea in earnest.
For one thing, it isn't practical to apply cursing (in its conventional form) as a pain-reduction technique precisely because of the audience concerns I raised above. It isn't socially acceptable to go around muttering expletives under one's breath (and as far as I'm concerned, this is a good thing!). But there are other problems, too. Recent studies show that the more one swears, the less the pain-relieving benefits. Beyond that, even someone as curse-friendly as I am has to admit that these words have a negative bent that I don't particularly want to reinforce in my life. But it can't be denied that these words do express anger, frustration, or pain better than words like "Mermen!!!" or "Cinnamon buns!!!" 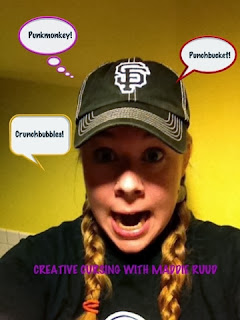 Enter creative cursing. I began inventing my own "cusses," with all the satisfaction of the hard, explosive sounds most expletives contain, but without the negativity they connote. And as I did, they started to morph and change into new words. It became a game. These days, I am constantly coming up with new nonsense curses, much to the amusement of myself and those around me. After all, who can really keep a straight face after a string of curses like "Punkmonkey!!!", "Crunchbubbles!!!", or "Punchbucket!!!"?
So go ahead. Cuss up a blue streak. And by that I mean, start with "Periwinkle!!!" and run with it.
Posted by Maddie Ruud at 5:11 PM

When I was a toddler I fell on a floor grate. I stood up crying and my parents could feel that I was going to scream a bad word. They laughed when I screamed "SELFISH."

I always wish you well in your journey toward health.

Great blog. Nice experience you share with us. You did a good job. Here, I want to introduce one another website deals with the Chronic pain relief. eToims is a non-invasive pain therapy treatment for individuals desiring general physical health maintenance and enhancement or relief from Chronic Pain Relief .